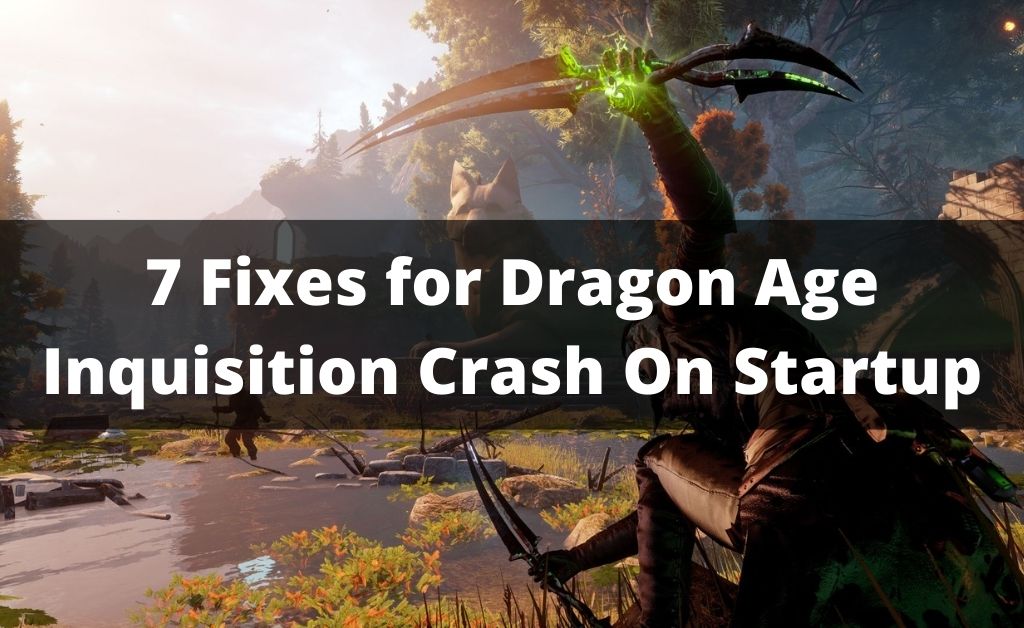 The big banners like BioWare and Electronic Arts coming together and bringing out a game as hugely anticipated as the Dragon Age Inquisition is nothing less of a dream for gamers. Dragon Age certainly is one of the most popular games as of now. Moreover, it is promptly absorbed and insanely loved by gaming fans. But numerous gamers have detected Dragon Age Inquisition crash on startup Windows 10.

What’s troublesome is that the Dragon Age Inquisition has been seen crashing on startup without error messages of any form. To be more specific about this problem, most of the players complain of the game crashing just after launching it.

Besides, many others have also reported that this version of Dragon Age crashes when they reach a particular gaming region called Skyhold.

The Most Probable Causes of Dragon Age Inquisition Crash On Startup

Monitoring the issue closely and gathering all of the information from the players on a real-time basis, here are some relevant causes that are responsible for Dragon Age Inquisition crash on startup PC. So, take a look at them now:

As you have now gone through the list of the possible causes, now know we can also fix this problem easily.

The situation of the Dragon Age Inquisition crash on startup has been annoying to many. Thus, here, we bring you the steps which shall get you the appropriate solutions for the same.

Simply check with the steps below to work yourself out of this error:

Fix – 1: Turning the Third-Party Antivirus Off

Most of these issues are triggered due to the conflicting antiviruses installed in the system. They really turn up to be as protective as being destructive for the game itself.

AVG is the main culprit according to the reports of an array of gamers. But, it is not very unlikely that the other antiviruses won’t be causing the same problem.

You can uninstall the third-party security system completely, whatever it might be. It can also be a possible solution if you can add an exception to the security of the antivirus.

The process of the same might vary. However, in AVG, you can go to Options>Advanced Settings.

Then, tap Exceptions from the menu which you will find on the left. After that, left-click on Add Exception. Here, go further and then, add exceptions to the game executable and another to the Origin executable.

As mentioned earlier, there is a genuine problem with some of the Nvidia graphics card drivers. This problem majorly occurs if the gamers are using the new 3D Vision.

Though this feature is really incredible giving the users the facility to watch 3D Blu-Rays from the PC, it interferes with Dragon Age: Inquisition.

This is a common problem and could easily be fixed if one uninstalls the drivers. Further, if you are worried about not being able to watch 3D movies, then don’t worry. This is because you can simply reinstall them afterward.

The process of uninstalling the driver of the Nvidia 3D Vision is:

Fix – 3: Turning the Origins Menu Off

If you are bringing this game through Origin, then remember that EA is known to cause several issues with this built-in menu. So, first and foremost, disable this in-game menu, Origin.

It is really a common error when your system fails to run a particular game in Ultra or High graphics if it is not initially built for it. In such situations, for some respite to the game fanatics, the graphics settings have an option where you can set it to Automatic.

But, this setting has not at all been convincing for the gamers. This is because this setting itself is proving to be unstable and thus, a cause to mingle with the flow of the game.

Fix – 5: Changing the Settings of VSync and Tesselation

The Automatic Graphics adjuster might be a disaster. Hence, you need to attempt to alter it manually.

Tesselation and VSync are responsible in most cases which leads to Dragon Age crashing on startup. Thus, you just need to visit the respective settings and set Tesselation to Medium and VSync to Adaptive.

Fix – 6: To Disable the Lunge and the Slash Functionality

In many cases where the gamers have reported this problem, fixing the Lunge bug has sealed the deal.

Fix – 7: Underclocking the Ram or the GPU as You might Feel it Necessary

Many of the users have noted this error and put their blame on the memory. Overclocking the memory might result in crashing Dragon Age. This you can modify easily, simply by going to Advanced Chipset Features>FSB & Memory Config.

These are some of the efficient solutions that we researched and selected for you to enjoy your favorite game without any hassle.

These methods will surely help you to get rid of the no message error which might crash Dragon Age Inquisition down.

How To Fix The Epson Error Code 0xf1

What’s The Best Method to Change Your Netflix Region

Why is the internet speed slow in New York?