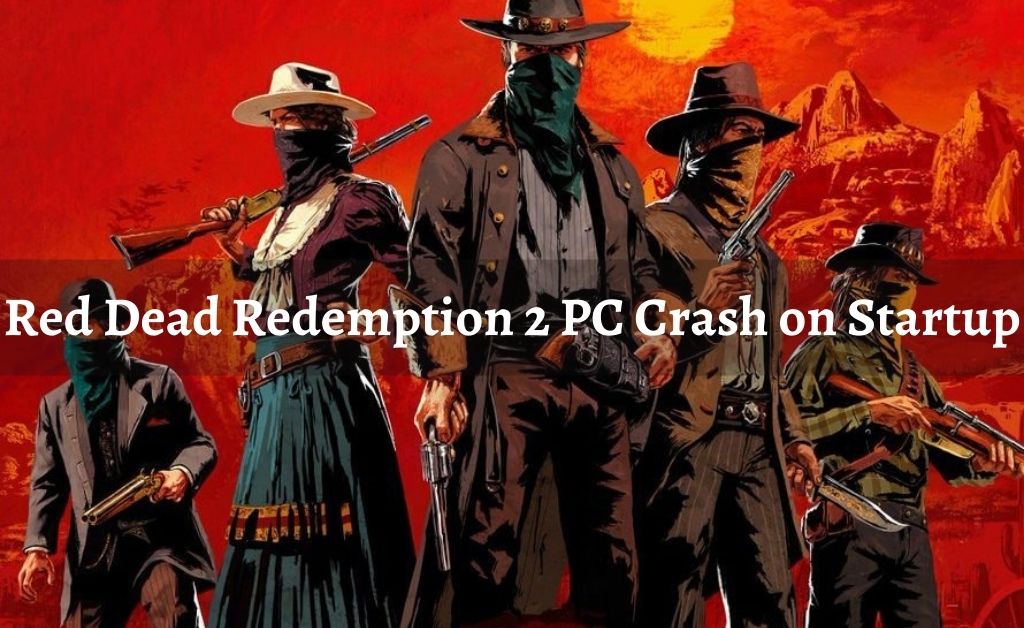 Among all games made by Rockstar Games, Red Dead Redemption 2 is considered to be among the best. It has gained very positive reviews from the users, and that has a lot to do with the impressive features it offers the players. Even though it is highly demanding on your device, it usually runs great if you fulfil the specifications. However, that doesn’t stop some devices from facing issues like red dead redemption 2 pc crash on startup.

You would want to resolve the issue quickly and get back to the immersive world of RDR2. If you ever face any error, then there are certain ways to fix the problem. So, all you need is some help on how to implement the fixing methods. Keep reading to know more on how to fix the Red Dead Redemption 2 PC crash on startup.

There are some common reasons why a game crashes on a computer. And, such types of problems are mainly caused by smaller issues in your device. These aren’t the same for all cases, so you must find out which one is applicable for you. Based on the causes, there are some simple solutions you must give a try.

As you know, RDR 2 is quite demanding when it comes to RAM. For optimal performance, you need to provide it with the proper amount of device memory. Then only can it run smoothly on your PC, otherwise, it won’t be unusual if it crashes your device as soon as you launch it. So, you might want to pay attention to the RAM first.

Are there any background programs running on your system? Check if there are any in the Taskbar and disable all of them except RDR 2. This will undoubtedly clear a good amount of our device’s memory. Also, remember to do this before you start the game the next time.

Some of the programs in your device might start along with the system by default. That can take up a good amount of RAM. If you don’t need them, switch them to start manually on the system Services page.

Are there any applications installed in your device that you have almost stopped using? Then, you might want to consider getting rid of them. After all, they will only occupy your RAM if you keep them.

Even though your device generates cache for better performance, it’s not always viable to keep them. You must delete all your browser history, as well as app cache files, to free some RAM.

Sometimes, a simple reboot of the system can free up a considerable amount of RAM. It will undoubtedly help for the time being, if your device has almost run out of RAM.

To ensure optimal performance, the game needs unrestricted access to its data. Now, it doesn’t get that when you’re running it with a user account. What do you do in such a case? It’s simple, you run the game using the administrator’s account. For that, you don’t even have to switch the entire system to this account. You can choose this setting just for the game.

Go to the Red Dead Redemption 2 folder in your File Explorer. Find out the executable file and right-click it. Select the Properties option, there you’ll find the option to run it as administrator. From that point, whenever you launch the game, it will have full access to all of its data. That will undoubtedly improve its performance a lot.

There is various software that you have installed in the system. They are programmed in different ways and differ from each other. Now, it isn’t unusual for them to conflict with each other. In such cases, they can’t perform properly in each other’s presence. You would need to get rid of one of them to make the other work, this conflict could also be between more than two apps.

In this case, you would want to give priority to Red Dead Redemption 2. In that case, you need to get rid of the other files. If you have started facing the issue after downloading a certain program, try removing it. The Event Viewer would also be quite helpful to you in detecting which program is causing the problem.

Without the right driver version, you can expect RDR 2 to crash on your computer. After all, your device needs the capability to fulfil the high graphics requirements for running the game. Now, it may have the optimal hardware for that, but that’s of no use unless the system can fully utilize it. Only the latest driver version can undoubtedly serve that purpose the best.

Are you using a long-outdated graphics driver? Then, it’s time to update it in any case. You can do that either from the Device Manager or from the manufacturer’s website. Also, you might find it viable to use one of those tools that automatically update all your device drivers.

In many cases, the crashes are caused due to the game files getting blacklisted. Now, why does that happen? In case you’re wondering, it doesn’t necessarily mean the game file is malicious for your device. It’s a kind of software conflict that’s responsible for this.

Open the antivirus application and you’ll find the game files there. Remove them from there and set them as exceptions if the program allows that. If that’s not possible, you may have to disable the antivirus while playing Red Dead Redemption 2.

The audio is yet another aspect you need to pay attention to if RDR 2 crashes your PC. Before the sound comes out through a device, it is converted from audio to digital signal.

Now, in case you’re wondering, sampling simply means the unit of sound the system converts per second. The higher this figure is, the better quality of sound you’ll get. In the case of Red Dead Redemption 2, it has high requirements in this aspect as well.

In many cases, a low sample rate has reportedly crashed this game. Navigate to the audio device’s properties in your device to find the sample rate options. One of the 48000 Hz settings is optimal for this case.

Any program running on your device needs certain resources apart from RAM. Moreover, they need a sufficient quantity of it. If they don’t get it, your device will naturally face issues while running them. Is your device providing Red Dead Redemption 2 with the optimal amount of resources? If not, that is why it’s crashing right when you start it.

Your device assigns resources according to the needs of a program, and that indicates it’s not providing enough to RDR 2. It would be better if your device assigned more resources to the game than usual. You can ensure that by simply raising its Priority higher than other programs. How do you do that? You need to go to the Taskbar and right-click the RDR 2 executable file. This will bring up Priority settings among other options. In this case, you must set it to High.

The system relies on some crucial files to run your game safely. In case any of them gets corrupted for any reason, it’ll start facing issues like crashing. So, you might want to check the integrity of your system files.

You can do that easily with the System File Checker. Open the Command Prompt and enter ‘sfc /scannow’ to initiate a thorough checking. By the end of this process, this tool will fix all the corrupted files.

The above-mentioned issues are common causes behind the Red Dead Redemption 2 PC crash on startup. You must use the simple yet effective methods to fix it as given here. Hopefully, they will prove to be helpful. If they don’t, then you shouldn’t make any delay in getting professional help.

If you’re using a PlayStation 4, you’ll need to check your available storage space in the Storage section of your console’s Settings. If you’re certain you have enough free storage space on your console but Red Dead Redemption 2 still won’t install, try hard resetting it.

It’s usually due to a shortage of storage space or internet problems.

What does Cannot start the application CE 30005 8 mean?

If you get the “Cannot start the application CE-30005-8″ issue when launching your game/app from an external hard drive, or even during gameplay, it signifies it’s not working properly and you need to fix it.

RPC Server Is Unavailable on Windows 10: Quick And Easy Fixes