7 Points Home Buyers Should Consider Before…

8 Technologies Powering the Hybrid Office of…

How To Protect Your Anonymity on The…

Top Technologies That Are Leading the Insurance…

Tips for Acquiring an All-terrain Vehicle

How To Join Metal Parts: Welding or… 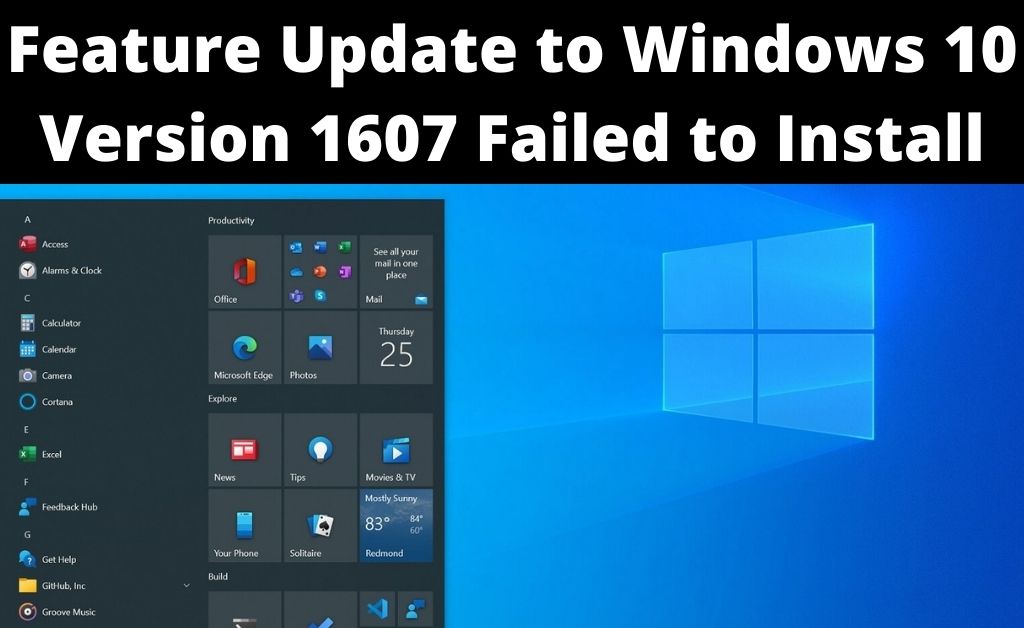 Getting an updated version of OS has become a trend among Windows users. After having the latest version, you can be able to use all the advanced application software including online games with ease. However, if you are facing this feature update to Windows 10 version 1607 failed to install issue then you can try the below simple fixes.

If the Windows 10 automatic updating system fails to install the latest 1607 version, then it can create a system slowing down the issue. To get rid of this problem you need to follow the below-explaining steps one after the other in such an instance.

The below procedures are simple to understand by applying which you will be able to fix this annoying updating issue.

To solve the feature update to Windows 10 version 1607 failed to install problem you can use the Windows 10 Update Assistant tool. Follow the below instructions for solving this glitch.
To begin this process at first check the working condition of your internet. After that open a browser and go to the Microsoft software download website. From here select the “Update Now” box. Now, wait till the downloading process gets over. Then open the downloading file and hit on the Update Now option at the right below a corner. After that follow the on-screen instructions to continue the installation process. This process will end with installing the latest Windows version 1607.

For updating the Windows OS, DISM files play a vital role. If the Windows image files get damaged, then it will resist you to update your OS to the latest version. Follow the below instructions to learn the process of repairing these Windows image corrupt files.
To begin with open the Windows search bar by pressing the four flag symbol Windows button. After that on this search bar type cmd and then right-click on the top searching result. Next, from this appearing menu list click click on ‘Run As Administrator’ option to open the “Administrator: Command Prompt” window.

Now on this black background window type “DISM.exe /Online /Cleanup-image /Restorehealth” and press the Enter button to execute. As the Windows image repairing process gets over, then Restart your system and check for Windows updates.

If the Windows update components like SoftwareDistribution and Catroot2 folders get corrupted, then it will also resist you to update Windows to its latest version. For this problem try this below explaining process which may solve feature update to Windows 10 version 1607 failed to install problem.
First of all, avail the Windows search bar by pressing the four flag symbol Windows key. At the empty search bar type cmd. After that right-click on the top search result and choose the ‘Run As Administrator’ option.

Now on this Command Prompt window type these below commands one after the other and press the Enter button in place of the “>” symbol to continue the procedure.
net stop bits>net stop wuauserv>net stop appidsvc>net stop cryptsvc>
The above commands are to stop the Windows update services. After that again type this below command and press the Enter button to execute.
Ren %systemroot%\SoftwareDistribution SoftwareDistribution.old
Ren %systemroot%\system32\catroot2 catroot2.old
All these above commands are to rename both the SoftwareDistribution and Catroot2 folders. The task of these folders is to store the data and temporary files. Now, this whole process will create the above-mentioned missing folders to resolve the folder files missing the issue.
Then again to restart the Windows update services re-enter the below series of commands one after the other and press the Enter simultaneously.
net start bits>net start wuauserv>net start appidsvc>net start cryptsvc
After completing these commands now you will be able to install the Windows 10 version 1607.

Sometimes antivirus software can also be a reason for this unpredictable feature update to Windows 10 version 1607 failed to install problem. In order to do this follow the below instructions.
To initiate this process at first press the Windows button to open the Search bar. Now on this Windows search bar type services and click on the top search result to open. Then under this Services window navigate to the antivirus software and click twice on it. This will open the antivirus properties window, from here change the Startup type to Disabled by dropping the menu list. Then try to install the Windows updates manually process to get the latest version.

How To Update Your OS To Windows 10 Version 1607 Manually?

To update your Windows Operating System manually apply the below steps.
At first, right-click on the Windows icon from the bottom left corner of the Desktop screen. Then from the popping menu list click on the Settings option. Now under the Settings window tap on the “Update & Security” section.

After that from the left panel go to the Windows Update section. Then the Windows Update section will expand on this right panel window. From here click on ‘Check for Updates’. Now it will automatically start to load the updates and at the same time, it will install automatically.
These are the methods by applying which you can be able to solve this feature update to Windows 10 version 1607 failed to install problem. After fixing this issue, you can be able to get the Windows 10 latest updates on your system.
By updating your Windows OS, now you can be able to download and install all the latest versions of the application software with ease.

Why is Windows 10 update failing to install?

Lack of disc space: If your machine doesn’t have enough free disc space to finish a Windows 10 update, the update will fail and Windows will notify you. Usually, clearing some space will enough. Corrupt update files: This problem is usually resolved by deleting the corrupt update files.

How do I force Windows 10 to install updates?

Select Start > Settings > Update & Security > Windows Update and then Check for updates if you want to install the update right now. Install any updates that are available.
previous post

5 Smart Approaches To Fix Unable To Connect To Nvidia Error