Everyone in the frontend development community is familiar with React, Vue.js, and Angular since these are the three most popular frameworks for creating online apps. A progressive framework is Vue.js, Angular is a full-featured front-end framework, and React is a UI library. Although they are quite similar and may be used interchangeably in the development of front-end apps, they are not identical.

React is not precisely a framework since it may be used as a UI toolkit to render items without imposing a particular project structure.

The smallest components of React applications are known as React Elements. Due to the React DOM’s quick updating anytime anything changes, they are more potent than DOM elements.

Although React is mostly paired with JSX, a syntactic extension that enables you to construct components that include both HTML and JavaScript simultaneously, it is built on JavaScript.

Only the View layer is the focus of the Vue.js core framework. Vue’s architecture was somewhat influenced by the MVVM paradigm even though it is not explicitly related to it. To ensure that the application data is handled in a manner that enables the framework to generate an up-to-date View, you’ll be working mostly on the ViewModel layer while using Vue. Check out the vue js development company to make your job easier.

You may construct View components using Vue’s templating syntax, which blends standard HTML with unique directives and capabilities. Although raw JavaScript and JSX are also available, this templating syntax is recommended.

Code organization in Vue.js applications, particularly bigger ones, is advised using SFCs. Transpiling SFCs into functional JavaScript code requires the use of programs like Webpack or Browserify.

An MVC framework is what the initial version of AngularJS is called.

The three main building blocks of an Angular project are the Module, the Component, and the Service. A root component and a root module are present in every Angular application.

Template, Class, and MetaData are the three main parts of an Angular component. Angular is informed where to locate the building pieces it needs to generate and display its view via the component’s metadata. Components in Angular employ Services to outsource business-logic responsibilities like data retrieval and input validation.

The front-end framework being used for increasingly complex apps should be able to carry out various functions that enhance performance and allow for more excellent scaling. Virtualization and server-side rendering (SSR) are two essential technologies.

With the ReactDOMServer official package, React provides server-side rendering. You may use the well-liked third-party solution React Virtualized for virtualization.

With the help of the official SSR package, server-side rendering is also enabled in Vue. Additionally, you may use the SSR-compatible Nuxt.js framework, which is based on Vue.

Unfortunately, Vue’s virtualization choices are not very robust. The finest virtual scrolling solution, in my view, is Vue Virtual Scroll List, however, it’s less reliable and stable than React and Angular’s alternatives. 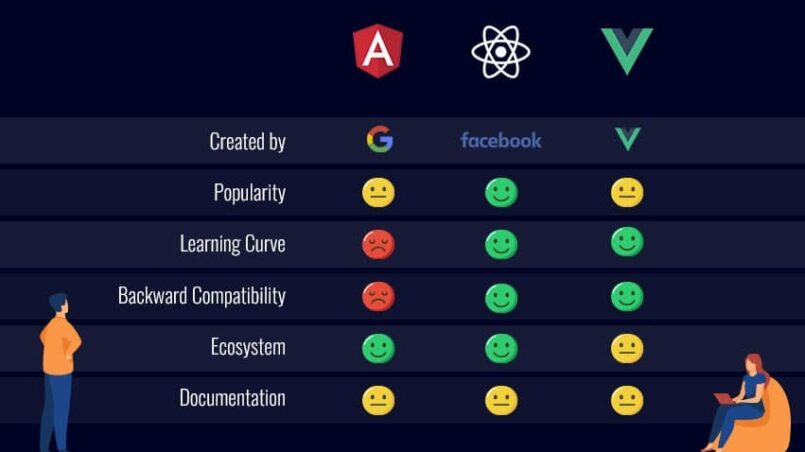 An official component for efficient display of long lists and the Angular Universal package for SSR are both available.

A lot of capabilities are available with Angular.js, which has a very clear framework. Without having to design structures or hunt for extra libraries, it enables development teams to proceed swiftly to implementation. However, it often adds extra baggage and is overloaded for modest tasks.

For projects that will produce a lot of front-end output, React is recommended. The development team must work closely together since there are no obvious structures. React’s library is more SEO-friendly since it supports server-side rendering more robustly.

There are several uses for Vue. Due to its compatibility with other JavaScript frameworks and its capacity to enhance existing applications with more complex logic, it may provide an excellent solution for almost any project type.

All three frameworks—Angular, React, and Vue—are actively being developed. They often release new versions while maintaining the present ones. All of these frameworks are safe to employ because of the high level of support that each now enjoys.

It’s worth noting that Angular isn’t growing as quickly as it once did, but Vue, although having just recently launched, seems to be rapidly expanding.

Benefits of Using Web Analytics Tools for Beginners to KnowWindows 10 will not install: Quick SolutionHow to Open “Local Group Policy Editor” in Windows 10?Learn How To Test Microphone Windows 10 And Troubleshoot Mic Problems